I like my avocado toast with a side of surfboards 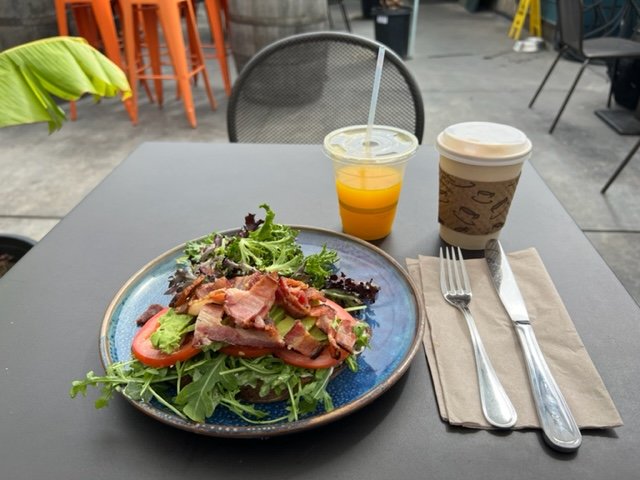 I went out with Alvaro this morning on a pretty flat day. When the waves came, I rode the first one all the way in.

I did this a few times during my first ever surf lesson on an enormous board on Maui. But in Pacifica, I usually fall off long before I make it to shore.

Then I knee-surfed all the remaining ones so I could keep riding all the way in—something Alvaro often encourages me to do so I’ll get practice catching waves and riding them longer.

It was nice to be with Alvaro again. Between my new surfing buddies and many missed surfing sessions over the past month, I hadn’t gone out with him in a while. It’s great to have him telling me when to start paddling and pushing me into waves.

When Alvaro and I said goodbye, he headed back up to the Taco Hell parking lot, while I peeled right to walk Margo Linda Beast back to Traveler, where she lives.

Then I walked the two storefronts from Traveler to Soul Grind, which has quickly become my new favorite coffee shop, due to its exceptional food and danceable music played at a reasonable volume.

Though the wave I rode this morning broke close to shore, making it a short ride in, I’m counting this as a personal first and celebrating it.

During this morning’s après-surf, while eating, I took a moment to appreciate the surfboards hanging to my right … and, of course, Margo Linda Beast, standing two backyards over.