Sixty-three-year old Myra Burg was seven when her mom chopped up her brother’s surfboard with an ax. She says surfing was counterculture when her parents told her she shouldn’t surf.

At age thirty, Myra saw a sign that read: “Surfing lessons here. If you don’t stand up, you don’t pay.”

“After a two-hour lesson, I didn’t have to pay,” Myra says.

For thirty years, Myra has surfed tandem, where two people ride the same board, one lifting the other into a series of poses while they surf. She and her tandem partner, Charlie, just celebrated their twenty-year anniversary. 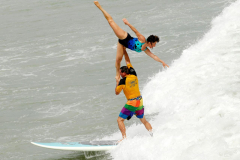 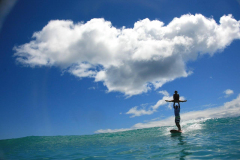 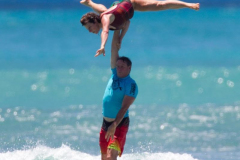 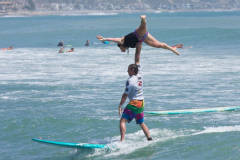 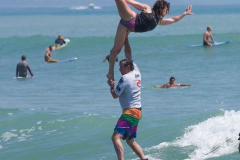 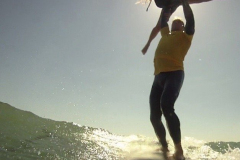 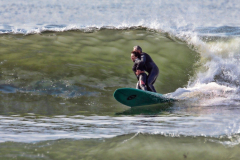 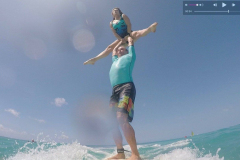 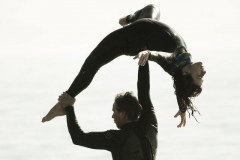 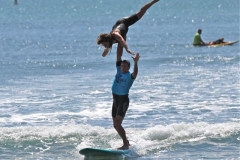 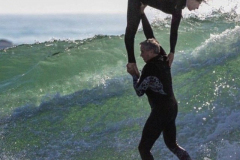 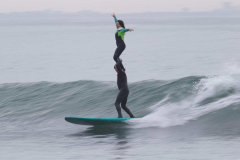 She tries to surf every day. “In warm water, I wear a bathing suit,” she adds. “Just not a bikini because no one wants to see these antiques. I spend more money on wetsuits than I do on pretty outfits.”

Myra prefers to surf early in the morning, when no one else is out.

“I’m bonding with nature,” she says. “I once saw an enterprising bird get the idea that if it balled itself up and smacked a pelican in the back of the head, it would knock the fish out of the pelican’s mouth. The pelican swallowed the fish, and the bird rolled down the pelican’s neck, landing face up on the pelican’s back and went, ‘Eh, that didn’t work.’

“Sometimes I paddle out at night and fish jump out of the water coated in bioluminescence,” she adds, referring to the biochemical light emission by some forms of sea life. “It’s magical.”

Surfing was prohibited at the beginning of COVID, but Myra says surfing is no longer counterculture.

“I surf with doctors, lawyers, and architects,” she says. “I also surf with the homeless, former homeless, and future homeless. My brother has died. If only he could have seen the day when surfing was illegal and pot was legal. The world is upside down.”