Greetings from Cayucos’s Southside Pier, where I just played in the waves with a surfboard.

To say I surfed would be engaging in hyperbole. To say I repeatedly lifted my board over every wave while deciding not to catch it would be more accurate.

This morning, I drove the twenty minutes here from my Cambria hotel because I’d read glowing reviews about Good Clean Fun, a surfing school and water sport accoutrements rental shop perched right on the beach.

I’d called GCF a couple times this week, trying to book a surfing lesson for this morning. None of their instructors was available, so I decided to come out here anyway, rent a board, and see what I could do on my own.

When I checked this pier on the Surfline app this morning, I was relieved to read that conditions were “poor and inhospitable,” the explanation being that the water was almost devoid of waves.

Since I was down one instructor and going out alone, no waves sounded pretty good to me. I decided to practice my paddling and wave-reading skills. At $20.00 for the board rental, it was an easy yes.

I assumed I’d swim out on my board, sit on top of it for an hour, and return it feeling as happy and relaxed as I am every time I walk out of the ocean.

Not so. It began just that way, but then the waves started coming. I missed a couple because I was lying on my board facing the shore, and I didn’t feel them swelling up around me until they had lifted me up and thrown me under.

Then I sat on my board and faced the ocean so I could see the waves coming and prepare.

But without an instructor to tell me which waves were the right size and ferocity level for me, much less when to start paddling and standing up, I could not figure out which ones I should try to ride and which I should let go.

I didn’t know any of that. So I lifted my board over every swell that came along and tried to watch for patterns, turning it into a lesson even though I wouldn’t try to catch anything today.

A few times, it occurred to me that I could try to surf one of these waves. Probably the worst fate would be that it would take me down, and that happened with a couple of my body-surf-and-boogie-board hybrid attempts, anyway.

But my instructor often tells me to let certain waves go because they are too big for me. Without him there today, I couldn’t be sure whether these were some of those. But they looked impressive, so I erred on the side of living to see another supervised surf session.

I returned my board a half hour in.

I would’ve been happy to keep playing in the water for another thirty minutes. But at a certain point, the hybrid method felt less interesting than actual surfing, boogie boarding (which one should not use a surfboard to do), or body surfing. The combination of my being tethered to a surfboard and not using it for its designed purpose meant it was time to go in early. 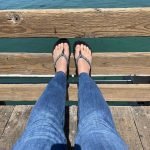 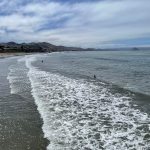 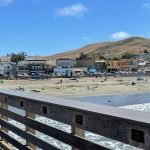 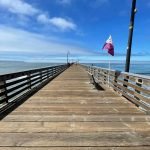 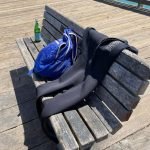 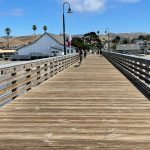 1. Except for injury, jellyfish sting, or shark attack—all of which I’ve managed to avoid so far—I think everything that happens in the ocean is great. I always learn something and love wrestling with the waves.

2. Every time I surf, or try to, apt metaphors for my life come to my consciousness. Surfing, or trying to, is the best meditation form I’ve discovered.

I’m quite sure #1 above needs no elaboration.

As for #2: Today’s life reminder was that when I’m trying something new, there is no question I can do it, irrespective of how challenging it is (and surfing is *hard*, people!). It’s a matter of learning the fundamentals and keeping realistic expectations: I’ll never compete in Mavericks, and it could take me a very long time to master standing on the board for more than a few seconds.

I am about to embark on another new adventure, which is not yet Facebook disclosure-ready. In talking to friends about this goal, the overwhelming response has been excitement and some variation of this sentiment: “You can totally do this.”

While cheering me on, a couple people have recommended I do not try this new venture alone. I should learn from people who know exactly what they are doing. As I watched the waves and lifted my board over them today, my friends’ cautionary advice could not have felt more right.

Sure, I could have upgraded my rental to stay out here for the day, trying to ride whichever waves I could guess might be appropriate for me. But I’d rather wait for my instructor so I can just face the shore, stare at my hands on the board, then obey him as he bellows, “paddle, paddle, paddle, paddle, paddle … UP!”

In the many times I’ve done this, I have not once looked behind me to see what kind of wave I was dealing with. I have enough to concentrate on without trying to sort that part out. I appreciate that I can count on him to tell me when to do what, while I work on pushing up and standing when he says to.

As I tap out this post, it is sixty-seven degrees on the pier. My wetsuit, which was dripping when I started writing, is now dry.

I am about to eat lunch in the same garden where I dined this morning—at a neighboring restaurant that shares the garden—then lie on the beach and read.

Even in our depressing world, life is good.