Greetings from Pacifica’s famously beautiful Taco Hell (as my high school cohort called it, even though my friends and I ate at one of its Phoenix locations four out of five weekdays back then).

This morning is too foggy for you to tell, but behind this TH is the profoundly marvelous ocean. This is where we meet for my weekly surfing lesson.

This morning, there were almost no waves. So today’s surf lesson was more about paddling and reading the water.

When we paddled out, I learned that I’m a “very good paddler,” which my surf instructor followed up by saying, “I was worried you wouldn’t be.” (He is wonderful and kind, and if you saw my current board skills, you would have shared his concern.)

We mostly sat on our boards and waited for waves to come. In their absence, guess what we saw instead? An enormous whale repeatedly coming up out of the water. We saw the whale about ten times in the hour we were out there. 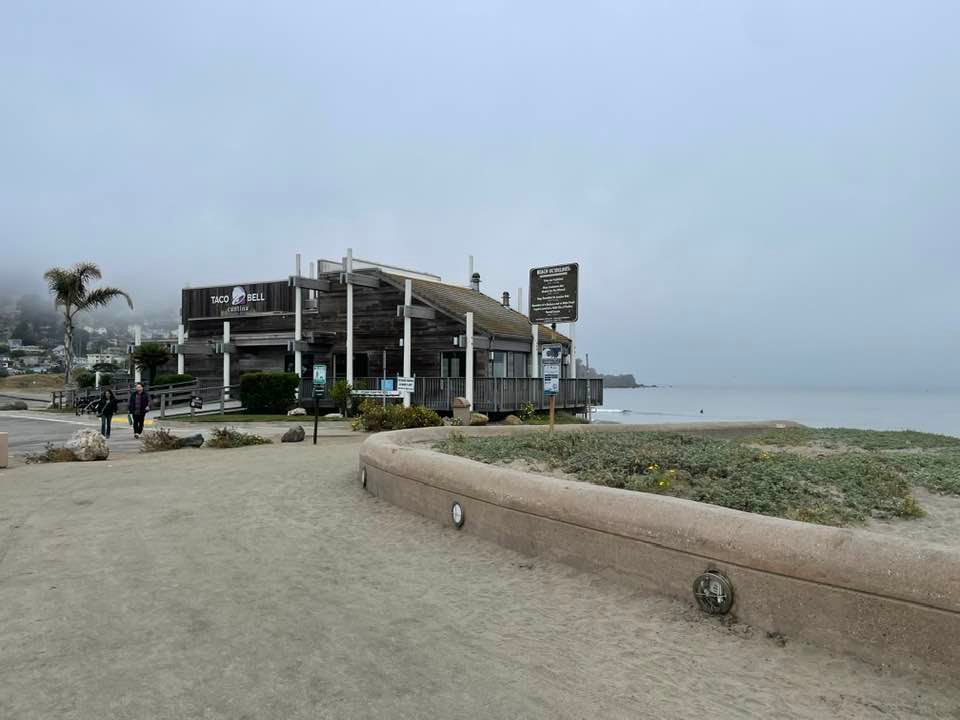 The three waves that did come were so small, I couldn’t tell how I did with them. I’m still working on staying up on the board, but my fellow student was impressed that I caught the wave once, apparently right where I should have … though I can’t claim to have done so on purpose, or even realized I had before he told me.

This morning, I learned that I’m a “very good paddler” (in case you missed it the first time) and that the best way to turn on the board when a wave approaches is from a seated position.

I also learned about Surfline, an app that tells you the ocean conditions and even has a live camera showing them to you, which explains why we were three of eight people out on waters that typically feature dozens of surfers at this time of day.

I sensed that my instructor and fellow student were disappointed that we barely had any waves. Not I. While driving to Linda Mar Beach this morning, I was feeling that after a colossally bad week, I wanted a calm experience today. Sitting on my board and watching the whale, I was grateful to have one.

Next Sunday, we’ll thrash on the waves. Today, peace.